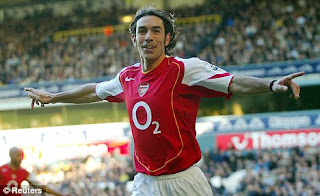 Robert Pires is a former French international footballer. He is most well-known for his time playing for Arsenal. He predominantly played on the left wing. Sometimes he played as a support striker.

Robert Pires was born in 1973 in Reims. He has a Portuguese father and a Spanish mother. As a boy he wore the shirts of both Benfica and Real Madrid. He inherited his passion for football from his father. He watched his father play for a local team each week. When he was 15, Robert Pires left school to begin a sports degree course at Reims. Due to being in the C team, he considered quitting football. His mother convinced him not to.

He spent a year in the Metz academy. Robert Pires made his senior debut in 1993. At Metz he scored 43 goals in 162 matches. He helped the team win the Coupe de la Ligue in 1996. It was clear to all that he had a great deal of technical brilliance. People questioned if he could replicate his form at a bigger club. 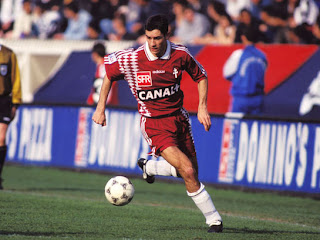 Robert Pires made his debut for France in 1996. Two years later he played a supporting role in France's triumph at the 1998 World Cup. In the same summer he signed for Marseille, the biggest club in France,. The transfer fee was £5 million. He thrived in his first season at Marseille. They finished runners up in both Ligue 1 and in the UEFA Cup. His second season did not go so well. He sought to leave the club.

At the European Championship finals in 2000, Robert Pires was limited to a supporting role in another triumph for the national team. He provided a crucial assist for David Trezeguet's golden goal in the final after coming on as a substitute. French team-mate Nicolas Anelka encouraged Robert Pires to start sporting his now signature facial hair. A narrow vertical strip from his bottom lip to his chin. He also grew his hair longer.

That summer Robert Pires had a choice of moving to either Arsenal or Real Madrid. Nicolas Anelka and Emmanuel Petit advised him to move to Arsenal. Arsene Wenger convinced him to sign for Arsenal in a £6 million move. In his first season at Arsenal he struggled to adapt to the physical and quick nature of English football. The English press were not sympathetic to Pires' plight. They described him as a "coward" and a "nancy boy".

It would not be long before he proved them wrong. Towards the end of the season Robert Pires was starting to show signs of what was to come. Memorably, after spurning a couple chances against Tottenham Hotspur in an FA Cup semi-final clash, he scored the winner to send Arsenal to the 2001 FA Cup final. Robert Pires would go on to score 8 times in 12 games in total in North London derbies. This endeared him to the Arsenal's fans. 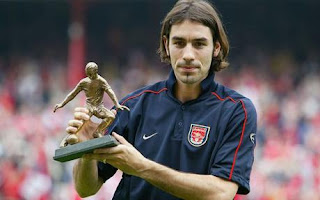 In the 2001/02 season, it was noticeable that Robert Pires had hardened up. He had learnt how to deal with tough challenges by opposition players. Robert Pires had started to build a great understanding with Ashley Cole and Thierry Henry down Arsenal's left side. He produced many outstanding moments such as his goal against Aston Villa. In a race with George Boateng, he deftly flicked the ball over his head. He then effortlessly lobbed the ball over Peter Schmeichel and into the net.

Arsenal won the Premier League and FA Cup that season. Robert Pires' contribution to their success was huge. His brilliance was recognised when he was awarded the Football Writers' Association Football of the Year. In March of the same season Robert Pires suffered a serious knee injury. It kept him out the game until the start of the following season. He missed the 2002 World Cup. His absence from the national team was noticeable. France failed to progress from the group stage.

The next season Robert Pires fired Arsenal to glory in a 1-0 win in the FA Cup final against Southampton. He had to be content with this as Arsenal were pipped to the Premier League title by Manchester United. In the 2003/04 season, Arsenal went undefeated for the entire league season. Pires scored 14 league goals, including a dreamy winning goal against Liverpool at Anfield. 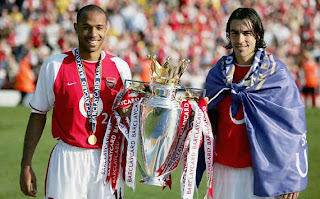 At the 2004 European Championships Robert Pires played in each game for France. The team did not play to their potential. They were knocked out at the quarter final stage. He made 79 appearances for his country. His international career came to an end later that year after a dispute with the new manager Raymond Domenech. In the 2004-05 season, Robert Pires again scored 14 league goals. He and Arsenal had to settle for second place in the Premier League behind Chelsea and a FA Cup final win against Manchester United.

In the 2005-06 season, Robert Pires faced increased pressure for a place in the Arsenal team. In a Premier League match against Manchester City, Pires famously fluffed up a penalty. He tried to pass to Theirry Henry from the penalty spot. He failed to kick the ball properly and then the referee awarded a free-kick against him. Robert Pires helped Arsenal reach the UEFA Champions League Final in 2006. Arsenal lost to Barcelona. He was substituted early on in the match after goalkeeper Jens Lehmann was sent off. This would be his last appearance for Arsenal. He scored 84 goals in 284 games for them in total.

Robert Pires felt that he was no longer considered a first choice player by Arsene Wenger. In the summer of 2006, he moved to Villareal. Robert Pires returned to Arsenal with Villareal in 2009 in a UEFA Champions League match. He received a warm reception upon his return by the Arsenal fans. He was released in the summer of 2010 by Villareal. Later that year he was signed a 6 month deal with Aston Villa. He is currently seeking a new club.
Posted by maupin9 at 08:42 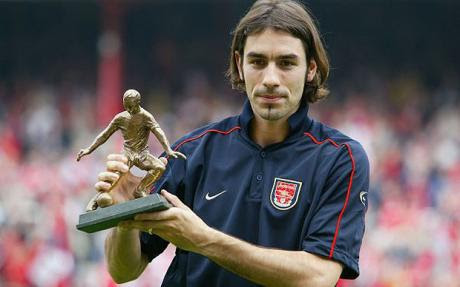 Dreaming of Pires was set up to pay respect to dreamy footballers.
The type of players who have the seemingly complimentary talents of technical brilliance, grace and flair.
Robert Pires is the near perfect embodiment of such a player. He is irresistible.